Here in the UK, there has been a series of recent scandals including the financial industry, celebrities, the media, and the health service. It made me wonder what was the root cause, why these things continue to happen, what lessons we can learn, and what you – as a leader or individual in an organisation – can do about it. This article addresses these issues.

The culture that led to the collapse of the financial services industry was motivated by greed. People wanted to earn lots of money and the culture made it OK for some of them to do the wrong thing. A culture of individualism can breed short-term financial success, but what does it mean in terms of society?  Some of the recent scandals involving well known celebrities show a breathtaking disregard for others, with bystanders literally doing that – standing by and letting it carry on.

Society today encourages people to be individualistic. But we should be thinking about stewardship – leaving the world a better place than we found it. That also means addressing wrong-doing by having a ‘speakup’ mentality.

Many professional people are motivated by the idea that what they do has a positive impact on society. As a leader, you can proactively create an environment that is a force for good.

In his analysis of the reasons for the financial collapse in 2008, John Taft presents an argument for establishing service to others as core to leading institutions and creating long-lasting success and security. He calls this stewardship:

“Leaving a Stewardship legacy requires that we see ourselves not just as individual actors in economic or social systems, but as members of communities. It also requires that we define our purpose not in terms of self-interest alone, of “what’s in it for me” but in terms of how we can serve others. Finally, our Stewardship legacy is defined not just by how we serve others during our lifetimes, but by the impact of our actions on generations into the future.”

In his writings on leadership, the late Robert Greenleaf created the term servant leadership – a belief that, whatever they are doing, leaders are doing it in the service of others.

In his book, Stewardship, Lessons Learned from the Lost Culture of Wall Street, Taft builds on his definition of Stewardship by articulating five attributes:

Are you active or passive? 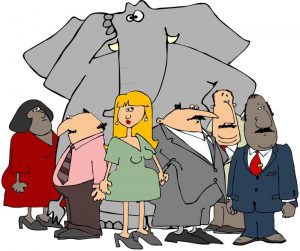 Nobody mentioned the elephant in the room (ClipArt by Dennis Cox)

Research has shown that being in groups reduces a felt sense of responsibility for taking action – it’s called the bystander effect. For example, if someone is being mugged or is ill, the collective crowd is passive and unlikely to respond. If, however, someone breaks out from the crowd to help, the chances are that others will follow.

So if the culture where you work is passive, the chances are that you are passive too. Coupled with a very long ‘To Do’ list, it’s easier to get on with your tasks than it is to stop, think, and decide what’s the right thing to do.

Being active means you have to take time to stop and think. That’s why many people ignore the opportunity and stick to their tasklist instead. It may be easier to be passive, but, sometimes, you need to stand up and do the right thing.

Whistle-blowing occurs when normal communication channels fail. Often, the whistle-blower is treated as the villain.

A research article published on 22 October 2012 by Cathy James, CEO of the whistle-blowing charity Public Concern at Work, finds that when employees feel they are listened to, the company is seen as having integrity. Organisations that live and breathe a speakup culture are seen to be more ethical. Employees speaking up and being heard should be part of everyday working life.

Yet, of 14,000 whistle-blowers since the charity was formed, only 40% were able to challenge wrong-doing without fear of reprisal.

Employees should be able to say what they think rather than wait until they leave the organisation. However, some people approached the charity at a very late stage. By that time, the working relationship was too damaged to recover.

Employees are often the first to spot when something is not right – especially new employees. People who have been there for a long time don’t notice, or find it harder to speak up, as it’s easier to do nothing.

“To see what is right and not to do it is want of courage.”
Confucius

You might think that whistle-blowing on a grand scale doesn’t apply to your working environment, but speaking up could also include:

“People should think things out fresh and not just accept conventional terms and the conventional way of doing things.”
R Buckminster Fuller, architect and engineer

What leaders can do…

As a leader, what legacy do you want to leave behind for your organisation and your people, and how do you role model that? How do you speak up, listen, and ensure you don’t get too remote from the different levels of your organisation? How do you build a culture of stewardship rather than individualism?

In his book, What Money Can’t Buy – the Moral Limits of Markets, Michael Sandel says:

“Democracy does not require perfect equality, but it does require that citizens share in a common life. What matters is that people of different backgrounds and social positions encounter one another in the course of everyday life.  For this is how we learn to negotiate and abide our differences, and how we come to care for the common good.”

Here are some ideas to show what you can do to encourage speaking out and a stewardship culture:

“Depend upon yourself. Make your judgement trustworthy by trusting it. You can develop good judgement as you do the muscles of your body – by judicous, daily exercise. To be known as a man of sound judgement will be much in your favour.”
Grantland Rice, American sports writer

Next month, we look at how to improve your influencing skills.