Leaders I work with often aspire to be ‘charismatic’. We all recognise a charismatic leader, but how many of us can describe what they actually do to earn that title? Inspired by an article I read in Harvard Business Review, this newsletter attempts to describe the common traits of charismatic leaders, so you can identify which you already have, and which you might want to develop.

Charisma is the “ability to use powerful and reasoned rhetoric to establish personal, professional and moral credibility in order to arouse emotion and passion in your followers, and give them a sense of purpose and inspire them to achieve great things.”
Harvard Business Review

In short, a charismatic leader is a leader you feel an emotional connection to, that you trust and will follow. 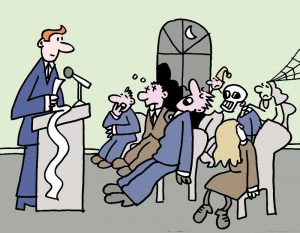 Having charisma is nothing to do with what you look like. Charismatic leaders don’t need to be physically attractive, and most didn’t start life seemingly destined for greatness.

Charisma comprises a set of traits that enable you to:

It might appear as though extroverts have an advantage over introverts, but the key is learning and consciously modelling the right style at the right time. Introverts have plenty of charisma – they are simply likely to need some quiet time to recharge.

Note that charisma doesn’t deliver great performance on its own; you have to back it up with delivery.

“You must be the change you wish to see in the world.”
Gandhi

Below are the most impactful traits you can use to demonstrate your charisma. They are split into verbal, non-verbal and other tactics. Where are you strong and what do you want to develop/practice more?

These tactics are commonly used in verbal communication by charismatic leaders, according to John Antonakis, Professor at the University of Lausanne, as reported in the Harvard Business Review.

1. Metaphors, similes and analogies
The ability to use a seemingly unconnected example so someone immediately gets the point you are trying to make.

“A lie gets halfway round the world before the truth has the chance to get its pants on.”
Winston Churchill

2. Stories and anecdotes
These help make a situation more interesting and bring it to life. If the story relates to your own experience you are more likely to create rapport (especially if combined with humility, warmth and humour as appropriate).

3. Contrasts
The ability to contrast is, according to the research, one of the easiest tactics to learn and use – although, surprisingly, it is not used enough. Comparing your position with your competitors or the impact of non-action versus action, for example, helps create a clear and compelling ‘call to action’.

4. Rhetorical questions
Commonly used by politicians, these tactics can be used to create a ‘burning platform’ for change. In addition, posing great questions sets people thinking which, of course, encourages their engagement and interest in your perspective.

6. Expressions of moral conviction
A charismatic leader is ethical and moral, and doesn’t just think about themselves.

Gandhi was humble but able to set an example of peaceful civil disobedience that inspired a whole nation.

“It is unwise to be too sure of one’s own wisdom. It is healthy to be reminded that the strongest might weaken and the wisest might err.”
Gandhi

“Our lives begin to end the day we are silent on things that matter. Injustice anywhere is a threat to justice everywhere.”
Martin Luther King

7. Reflections of the group’s sentiments
It’s incredibly powerful when you know your audience, understand where they are coming from and can tap into that so they come with you. As part of your preparation, step into their shoes and imagine what they are thinking, feeling and want.  How can you incorporate this?

8. Setting high goals
&
9. Conveying confidence that the high goals can be achieved
Goals should be exciting and ambitious – have you heard of a BHAG (a big, hairy, audacious goal)? You need to feel and be able to show you believe it’s achievable and will be an interesting/stimulating ‘ride’.

In coaching sessions, I sometimes call the distinction between verbal and non-verbal behaviours ‘the song and the dance’:

1. Animated voice
A monotone voice sends people to sleep! You are more likely to convey passion if you vary your tone and volume of speaking for maximum impact. Silence is also powerful, so use pauses for effect.

Winston Churchill and Martin Luther King did not speak fast. You lose credibility if you become too energetic. Speak at the right speed, so people can listen and think at the same time. This is especially important if speaking to people who have different languages as their mother tongue.

2. Facial expressions
Use eye contact when you are presenting. Don’t scan around the sea of faces; instead focus on one individual for a few seconds, then another, so you really connect. Show emotion on your face, so you smile or look reflective, as appropriate.

Bill Clinton famously focuses completely on the person he’s talking to in one-to-one dialogue, which makes them feel as though there is nobody more important at that moment, while John F Kennedy asked follow-up questions so show he was listening. Give people your full attention, be present in the moment, and don’t let your mind drift.

3. Gestures
Use your hands to point or lead the audience, without overdoing it so you look like a performing bear! Show energy and enthusiasm to reinforce your message.

These days, the work environment is often in a state of change or felt sense of chaos, especially in big companies where there may be a lot of competing priorities. Employees may feel there are new things to deal with all the time. So it’s especially important to be consistent. Keep returning to your main theme and repeating your key messages, as this reinforces what’s important to you, gives credibility and reassurance, and you are more likely to get people to follow you.

Using humour is a great way to ‘lighten the load’, which is why I’ve included a cartoon in this month’s article.

“A sense of humour is part of the art of leadership, of getting along with people, of getting things done.”
Dwight Eisenhower

Many of us have back-to-back meetings and run from one meeting to the next. However, preparation is key to delivering your message effectively.

To develop your skills try the following:

Here’s an exclusive quote from one of my clients who is highly respected as a talented, charismatic leader:

“Some people think charismatic leadership comes naturally and some people think you can learn it. I’m sure it is a little of both but either way, it requires some thought and insight to get it right.

What is it though? In essence, I see it as helping people to believe in themselves, to see the world differently, and to achieve things they did not think they could…and to feel exhilarated about doing it.”

If you’re interested in charismatic leadership, you may like to re-visit my previous articles that are linked to this subject, including:

Next month, we look at dealing with ambiguity.