Agility is a key theme in business at the moment. Last month, I wrote about How (and why) to be an agile organisation. This time, we look at the components of an effective agile team, and the role of the leader in enabling agile teams.

Agile teams come together to work on something special, and stay together for a reasonable period of time. They might go on to work on another problem, or develop the idea they’ve come up with. Don’t confuse this with scrum teams. As I explained in my recent article How to get a scrum team up and running, these get in, do the work and disband, so they only stay together for a short time.

What makes an agile team?

Conditions are ripe for agile teams in any situation where problems are complex, solutions are at first unclear, project requirements are likely to change, and close collaboration with end-users is feasible. Operations such as plant maintenance, purchasing, and accounting are less fertile ground, where stability and regularity will be important.

Rita Gunther McGrath from Columbia Business School identified large US companies that increased their net worth, and from her research, concluded that these companies were both stable and rapid innovators. Therefore, know where you can innovate and know where you should be stable, and establish your teams accordingly.

Components of an agile team

When choosing people to become members of an agile team, you want to include high-performing individuals who are (hopefully) already known for their effectiveness. They need to have a reputation for being good at what they do. That’s because others on the outside will make assumptions about the value of the team based on who’s in it – this will be particularly valuable when agile teams are a new concept and therefore ‘at odds’ with how things are normally done in your organisation.

What’s more, you need to pick a diverse mix of personalities, experience and skills to maximise the creativity and reduce unintentional bias.

For more on this, please see my article on How and why to collaborate effectively

You need to know your people, and be well networked so you can ask colleagues who they know that might be suitable. As suggested in last month’s article, you need a system where you can record people’s experience and qualities, and search it to find people there.

For more on this, please see my article on Emotionally intelligent teams

It’s worth setting up a few agile teams, not just one or two. This will create its own momentum and gives the teams the best chance of making an impact.

Each agile team will need minimal dependency on other people and functions. They should be authorised to initiate activities, spend their preassigned budget as they judge best, and make as many decisions for themselves as they possibly can. This is particularly important in organisations where you might be experimenting with agile teams. If the majority of the organisation is operating in a traditional hierarchical structure, things will move more slowly, which could quite quickly disable the impact of your agile teams. Members will get frustrated, and may leave the organisation.

What to work on

Agile teams work best when they have complicated problems to sort out, where the solution is not immediately obvious and there is lots of ambiguity.

They will be working on something that’s never been done before, which involves co-creating.

Although this slightly contradicts the ‘stand alone’ message above, it’s important to encourage agile team members to network and collaborate with anyone they think will help them get the work done. By drawing on and collaborating with other people, your agile teams will increase their capacity – so don’t allow other teams to act as roadblocks.

Obviously, it’s important to address a problem your customers really care about. For example, it can work really well when your agile team collaborates with customers to build a prototype or pilot a project.

Note that the focus should be on outcomes, not metrics. Free them up from your usual corporate reporting systems and budgetary cycles. All that stuff is a distraction, so get rid of it all and let the team figure it out.

Agile teamwork is all about learning, with fast feedback loops so teams can quickly adapt as they go. It’s not about perfection; it’s about progress. That way, people won’t be worried about getting it ‘right’. This ‘learn as you go’ process should be outlined at the beginning, when the team is formed.

Allow time and space for team members to reflect, give each other feedback, and then learn. This doesn’t only give people fantastic personal development, but allowing them to take time to sit and think also enables more creative solutions to be found. If everything is ‘pace pace pace rush rush do’, people will miss breakthrough ideas.

In order to do things differently, people need to be bold enough to challenge the status quo. Not in order to be destructive, but with a pioneering spirit. They shouldn’t be inclined to accept ‘how things are’. Rather, they should feel excited about being the first to do something new.

Note that it’s wise to introduce an agile mindset across the organisation, so that the more stable teams understand the concept of agility, and become open to adapting themselves. As they look at agile teams, they might be inspired by the freedom and energy, and seek to adopt the mindset and practices in their own area!

As with any diverse group of people, agile team members need to feel safe to be who they are.

They should also feel safe to openly report problems – because if issues are hidden and not spoken about, it could derail the whole team.

And, going back to my previous point about networks, they should feel free to contact and connect with anyone they need to talk to.

For more on this, please see my article on Psychological safety and team effectiveness 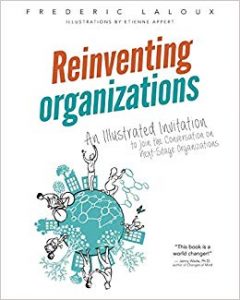 A few years ago, I bought a book called Reinventing Organisations by Frederic Laloux. This has been adapted more recently into a summary form that’s a ‘bitesize’ read. Laloux discusses how organisations evolve across the ages in society, and he believes we are on the cusp of the next evolution into a new way of being. The organisational culture we’re used to will no longer work in a VUCA (volatile, uncertain, complex, ambiguous) world and he points out how draining it is to be part of it. He proposes a new way that embraces agility, and points to three breakthroughs that form this new way:

So, if you are about to form an agile team, see how you can incorporate these three breakthrough ideas into the set-up. These three ideas are new to most of us, so you’ll need to be a strong leader to lean in and stay true when challenged. Laloux found in his research that some companies focused on one of the three initially, and then incorporated the other two – so this may be easier for you too.

Given the amount of freedom your agile teams will have, you might wonder about what you can do as the leader. Your role is more about coaching than it is directing, so you might have to challenge your own paradigms about the value you create.

Here are some ideas to help you:

As always, this article links to others I’ve written. In addition to the links in the text above, here are some more that you might find useful:

Having looked at agile organisations and agile teams, we explore how to be an agile leader.