In today’s society, we no longer live in big family groups. When family and friends live far away, the people we would usually turn to are not easily available. Instead, workmates can be a big source of support. However, death is a topic we don’t often talk about at work.

When someone has lost a loved one, their colleagues can feel uncomfortable, and it can be hard to know what to do or say. As a result, they may keep quiet about it.

This article gives you some ideas about how you can support a grieving colleague, whether you’re their line manager or a concerned workmate.

If you have suffered a loss and had support that you found particularly helpful, I’d love to hear from you. I will collate any responses and write an update to this article so we can learn from you (I will assume you wish to be anonymous unless you tell me otherwise). Thank you!

“Even the darkest nights will end and the sun will rise.”
Victor Hugo

At work we are often expected to maintain emotional control, but bereavement is a time when we really should feel free to express our emotions. When grief is disenfranchised, it can make the mourning process longer. As a result, there may be a loss of performance and reduced loyalty to the company.

Because there is often a cultural stigma about discussing death, the grieving person might become isolated at a time when they need to feel even more connected than usual.

Many companies have a policy about how to deal with this situation, financially, practically and emotionally. For example, they might offer a period of compassionate leave that’s linked to the closeness of the relationship with the deceased (although often this is not much time off). The policy will reflect their corporate values, and can make a big difference to employees who have lost a loved one.

“Somewhere along the way, we must learn that there is nothing greater than to do something for others.”
Martin Luther King Jr

What you can do

The best thing is to acknowledge what has happened. Rather than do what you think you would want in that situation, ask them how they want to be supported. Some people might want to talk about it, others might want to keep it quiet and use work as a distraction. Ask and respect how much information they want others to know. And know this is unlikely to be static – as the bereaved person processes their emotions, their approach may shift more than once.

Ask them how they are feeling today, because each day will be different. Truly listen to their answer. Don’t try to resolve the situation or fix things for them; just show empathy and caring.

If they are silent, give them space. Sometimes, saying nothing is the best thing you can do.

If they are off work, find out what level of contact they would like. If they indicate it would be welcome, you might send occasional messages of support. Not so much that you are hassling them, just enough to show you are thinking of them. This could just be a quick text message or WhatsApp chat.

If they would appreciate it, you might even visit them at home, attend the funeral or send flowers from the office. You might do a collection amongst their co-workers to buy a card, make a charity donation, plant a tree or name a star.

“No one is useless in this world who lightens the burdens of another.”
Charles Dickens

If you’re their line manager…

Tell them the company policy so they know what support they are entitled to. This might seem a little task focused, but it can be reassuring in the midst of so much grief and uncertainty (e.g. how to organise a funeral and register a death) to know something tangible.

Reassure them that they’re valued, because if they take time off, they need to know their job is safe. Inevitably they will be less focused at work for a little while, and this might make them feel insecure or lose confidence. If you notice they are not focused or that they take a moment to stare into space, they need to know you’re not judging them.

Make it OK for them to be kind to themselves. That means you might need to lower your expectations about what they can accomplish. Be flexible about offering time off, remote working, and reallocating work among the team.

Invite them to talk if they want to, and provide them with time and space to do so. If you have planned a discussion with them, don’t book another meeting immediately afterwards, so you can concentrate on them properly, rather than rushing off to your next appointment.

Provide access to counselling, particularly if it seems they are taking a long time to recover. Note that they probably won’t want this immediately. Having a counsellor to talk to can really be a big help.

If you can, provide a private room for them to use when they feel like it. This is particularly helpful if they work in an open-plan office, lab or factory. Then they will know there is somewhere they can go for a private moment if they need it.

“You have not lived today until you have done something for someone who can never repay you.”
John Bunyan

What NOT to do

Don’t pretend nothing has happened and avoid talking about it. Even eye contact or a smile can make all the difference.

Don’t judge or trivialise the loss based on who died. You can’t possibly know the nature of their relationship or the level of grief that someone else is suffering.

Try not to say clichés such as, “I know how you feel”, because, actually, you don’t. Equally, try not to give advice or compare their loss with your own experience (tempting though this can be).

If they cry, don’t leave the room (unless they want you to). Tears are a useful way to release emotion.

Note that the process of grieving is not linear. Everyone goes through it in their own way and at their own pace.  Your patience will make a big difference.

You might know the Kubler-Ross change curve, initially developed in the 1960s to explain the different stages of grief and now commonly referred to in describing the emotions we go through in times of change… 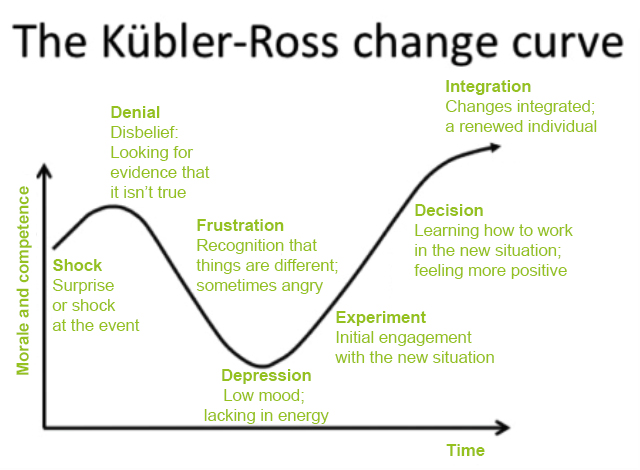 An important point to know is that not everyone goes through all of these stages, and the pace varies by individual.  Also, whilst it’s shown above as a linear curve, the reality may be different.

“A kind gesture can reach a wound that only compassion can heal.”
Steve Maraboli

This article was inspired by a piece in Harvard Business Review: ‘When a colleague is grieving’ (July/August 2019). If you’d like a copy, please ask me.

Sheryl Sandberg’s husband died suddenly in 2015. (He was Dave Goldberg, the CEO of online polling company SurveyMonkey. She’s Facebook chief operating officer). That experience prompted her to write a book with Adam Grant about resilience: Option B.

You might also find my other articles useful, whether you are supporting a colleague or have suffered a loss yourself.

It occurred to Pooh and Piglet that they hadn’t heard from Eeyore for several days, so they put on their hats and coats and trotted across the Hundred Acre Wood to Eeyore’s stick house. Inside the house was Eeyore.

“We just thought we’d check in on you,” said Piglet, “because we hadn’t heard from you, and so we wanted to know if you were okay.”

Pooh looked at Piglet, and Piglet looked at Pooh, and they both sat down, one on either side of Eeyore in his stick house.

Eeyore looked at them in surprise. “What are you doing?”

“We’re sitting here with you,” said Pooh, “because we are your friends. And true friends don’t care if someone is feeling Sad, or Alone, or Not Much Fun To Be Around At All. True friends are there for you anyway. And so here we are.”

“Oh,” said Eeyore. “Oh.” And the three of them sat there in silence, and while Pooh and Piglet said nothing at all; somehow, almost imperceptibly, Eeyore started to feel a very tiny little bit better.

Because Pooh and Piglet were There.

No more; no less.

From Winnie the Pooh by AA Milne